Today I will be reviewing the Liga Privada Único Serie L40. This cigar has been resting for just about 90 days in 64% humidity. I will be smoking it alongside an IPA that has been rested on wine musk, as well as a glass of water. 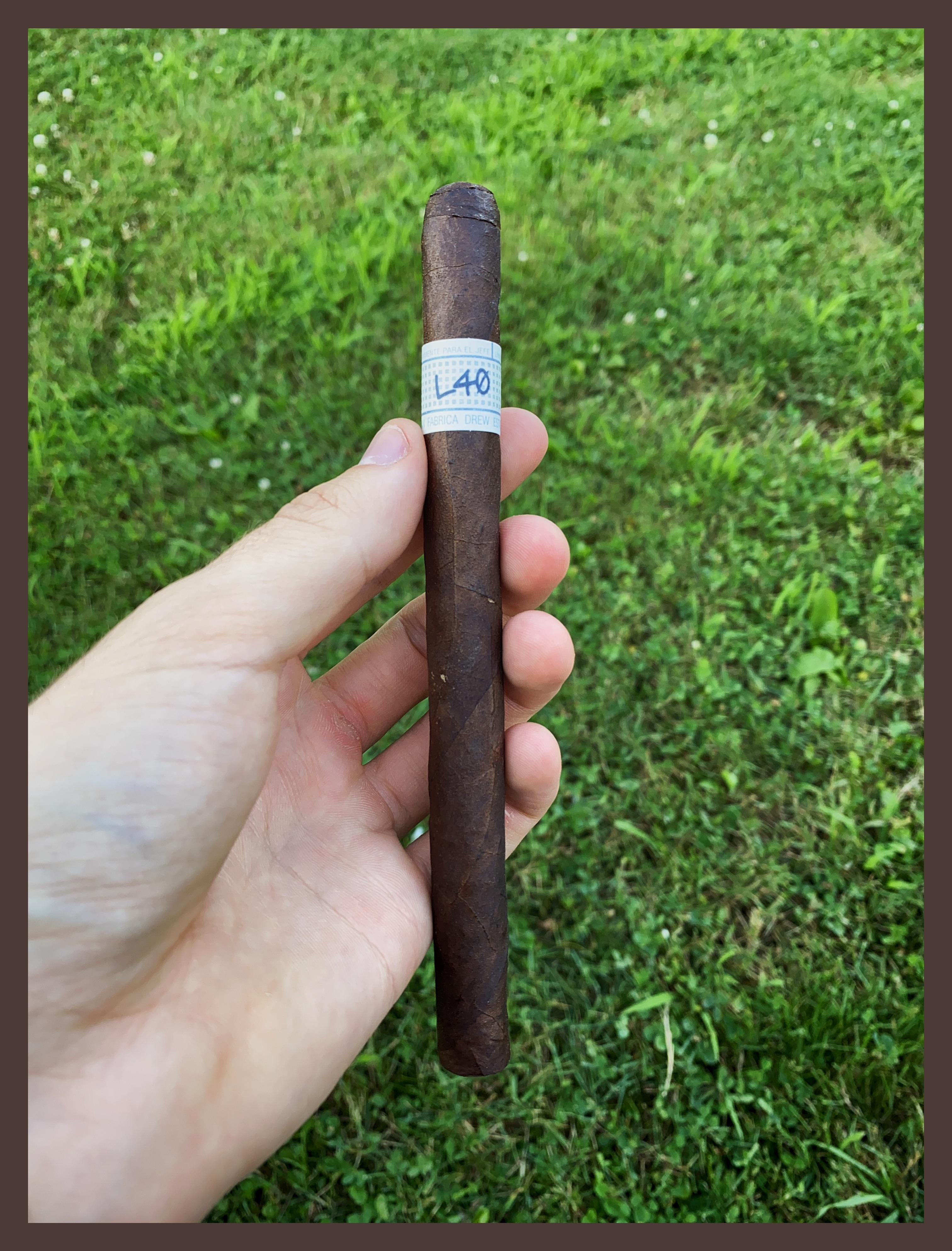 At first glance, the wrapper is a gorgeous dark brown with coffee-colored highlights and dark undertones around the edge of the leaf. The wrapper has a granular texture that I've come to expect from Liga Privada. It's veiny, but not *too* veiny. The depth of color in the wrapper is reminiscent of quality leather that wears the badge of a beautiful patina. When compressed, most of the cigar is semi-firm to firm with the exception of the cap. The cap has significantly more give than the rest of the cigar, but hopefully, that won't affect the performance.

The initial aroma is surprisingly floral, in a very pleasant way. It reminds me of earl grey with expected notes of tobacco and earth. The cold draw reveals a dominant note of Lipton black tea and a similar floral profile to the smell.

The burn line starts off crisp. The draw is easy and smoke production is thick, bountiful, and creamy - fantastic. The first few draws are pleasant and not as strong as expected, with the flavor being dominantly earthy tobacco. After a few minutes, I'm hit with a strong note of raisin on the exhale. On my first retrohale, I'm pleasantly met with the sweetness of a roasted cashew. It's not *sweet* by any means, but there's a complex, creamy, sweetness hidden in the smoke. Here and there, I'm picking up slight notes of dark fruit: frozen cherries, plum, and date. The ash continues to burn perfectly until it slips off right before the second third. I'm surprised about how smooth the L40 takes off. For the first third, I'd place it at a medium-full profile.

The L40 really starts to take off at the beginning of the second third. The strength increases to a full and starts giving me much more spice than was found in the first third. However, it isn't peppery at all. The Lipton black tea from the initial aroma has reappeared, this time with the flavor of if you left the teabag in for *just* too long. This is an interesting note that I haven't experienced much before tonight. The burn begins to skew, so I retouch the end to get it back on track. On the retrohale, I'm picking up notes of charred marshmallow. Not the gooey, decadent inside, but if you were to peel off the char and eat it separately. It's quite a tasty note. The smoke production continues to be fat and creamy. I haven't gotten the roasted cashew sweetness that was found in the first third and I'm finding myself missing it. The second third has definitely become much more of what I expected out of a Liga Privada.

Since retouching, the burn has stayed even and crisp. As I enter the final third, the L40 begins to come back down from the spicy, full-bodied midsection. The spice is still prevalent, but still not in a peppery manner. Burnt molasses is present. The flavors from the first third have reentered the arena, especially on the retrohale. The cigar has become somewhat spongy to the touch but maintains enough structure that it doesn't bother me. Black tea, raisin, tobacco, and earth are the leading tones of the final few puffs. I put the cigar down with about 3/4 inch left to go. I'd smoke more of it if I could, but it's become too hot for my enjoyment.

I'm not usually a lancero smoker, but the L40 has me reconsidering this. I find that many cigars fall into the trap of having a singular note - this was **not** that at all. The evolution in flavor from the first third to the second third was pronounced and invited. The finale of the final third tied everything together in a wonderful fashion that leaves me excited for the next time I can smoke one of these. I would highly recommend smoking one if you have the chance.

(This is my first review on BOTL, I love feedback and constructive criticism if anyone has any pointers!)

Ligas are absolute junk, i recent bought a mixed 5er just to try the no 9 and t52 again... awful.

Interesting story. So to be clear, Opus Junk. Liga, junk. What are you smoking thats not junk? Liga has certainly fallen off, the No 9 and T52 are very different than they were 6-8 years ago. The unicos are in a different league IMO.

I liked your review, reviews are tough, but enjoyed yours!

I think "constructive" may have been glossed over by Chuck.

I wish the few Ligas I have tried tasted more like the one in your review.

Correct ty have a great day

The delusion is strong with this one. Liga.. maybe. Opus? Get real.

Shaunylw said:
The delusion is strong with this one. Liga.. maybe. Opus? Get real.

Yeah I'd smoke a case fuente or a petit lancero.. but that's about it. Most of their LEs are in my opinion trash

Opinions killer, they're out there. Get real.

Appreciate the welcome. While I do agree the quality of the No. 9 and T52 have definitely declined, this was a great smoke. For me at least - everyone has there opinion. What’s one of your favorites that you’d compare to this?

icehog3 said:
I think "constructive" may have been glossed over by Chuck.

I wish the few Ligas I have tried tasted more like the one in your review.
Click to expand...

I was pleasantly surprised by this one, especially with it being a lancero and all. Maybe I got lucky, who knows.

Good review, welcome to BotL. Personally I am of the opinion that Ligas are simply the "cigar flavored" line extension of Acid.

Phatoon said:
Appreciate the welcome. While I do agree the quality of the No. 9 and T52 have definitely declined, this was a great smoke. For me at least - everyone has there opinion. What’s one of your favorites that you’d compare to this?
Click to expand...

solid review! thank you. this is one of the liga's i really enjoy. not a fan of most of their stuff.

jwintosh said:
solid review! thank you. this is one of the liga's i really enjoy. not a fan of most of their stuff.
Click to expand...