Fake Cubans...Would you want to know?

Glassman said:
He’s saying everything bought outside of an lcdh is fake. As if people who are smoking from a wide variety of regions can’t taste the difference..
Click to expand...

I had a petite edmundo this am that was a glorious fake then!

Who voted no? I need to get rid of some nc's and I've got plenty of bands.
I

Glassman said:
He’s saying everything bought outside of an lcdh is fake. As if people who are smoking from a wide variety of regions can’t taste the difference..
Click to expand...


Sent from my iPhone using Tapatalk
I

I fly for free everywhere I go (points). I’m just coming back from Australia now. I travel a lot.
I buy a box when leaving Canada.. Sometimes two. I then bring them back duty free 50 per trip.
I don’t go to Cuba anymore. I hate Cuba. It’s a shit hole. I have lots of friends that always go because it’s cheap. They bring me cigars I want with a receipt. If no receipt they can keep it I don’t want it, so many fakes.
I’ve never had a custom.
Never had a Paladar.
Enjoy your imports!


Sent from my iPad using Tapatalk

do you often smoke two at a time ?
I

do you often smoke two at a time ?
Click to expand...

Never lol.
The Cohiba was from the night before. I got tired and went to bed. That was my outside office in Oz so older sticks collected occasionally without stinking anything up.

Here’s “three at once” and a virtual one while walking the dogs.

Cigary43 said:
Fake Cubans have been known to contain contaminated items...after all they are being made and sold by some real POS folks...do you want to risk your health and money????
Click to expand...

that would be my main concern

ontopic, a buddy came back from Cuba recently and, kowing me as a cigar smoker, gifted me with some of his haul. some el credito cigars (which the locals smoke, according to him) and some cohibas.

it didn't dawn on me to check when he was giving them to me - I was so full of gleeful anticipation it wasn't before I got home that I had the "wait a minute" moment.

anyway, some time later, he's talking about cuba and the cigars he bought, apparently forgotten about the ones he gave me, and it's cohiba this cohiba that, so I have to interrupt him.

- sorry to tell you, but the "cohibas" you bought are most probably fakes

- unless you bought them at the official habanos store there's no way they're real.

- no, no, see, that's where you're wrong. these cigars are legit because the factory rollers are allowed to take home a box each at the end of the day.


but anyway, he said he'd already tried them and enjoyed them, so - outside of the hazardous materials concern - who cares if they're real or not in the end

The reality that I choose is my own reality of what I know and not what others tell me...I won't risk my health on an opinion.

cwant said:
A buddy of mine bought some fake Cubans on his recent trip to the Bahamas. As soon as I saw them, I told him they were suspicious and likely fake. He didn't believe me at first, but I explained that CCs don't come in cellophane, and that no such EL 2019 Hoyo (see picture) was released by Habanos. Convinced that I wasn't just spewing nonsense out my backside, he became angry. He wasn't angry at the shop that sold them to him, or at himself for being duped, he was mad at me. He told me that crushing his excitement at this point, when there was nothing he could do about didn't make me a good friend, just an asshole. He would have preferred I had just kept my mouth shut. Obviously, this is not the reaction I anticipated. Personally I would want to know, to be more knowledgeable going into future purchases if nothing else. I would be more upset if I later found out my friend knew I had bought fakes and chose not to tell me.

Anyway, out of curiosity, what are your thoughts. Would you want to know, or remain blissfully ignorant? Did I do right my looking out for and trying to educate my friend, or am I just an asshole?
Click to expand...

My decision would be:

BotL Emo - "I have a question for you. Do you want to know the truth or d o you want me to coddle your feelings?"​
BotL Mature - "Dude, you got ripped off!"​
Newbie Mature - "Mind if I share with you some knowledge here?"​
Newbie Emo - "Friend, these are great cigars! Congrats!"​

Glassman said:
So fake. I should probably just trash em.
Click to expand...

Yes! But they need to be disposed of PROPERLY and SAFELY.

I'd want to know and would tell other BOTL's if they acquired fakes as well. As others have shared, most people that aren't cigar enthusiasts I'd leave them in their "ignorance" and let them flaunt their EL's from marca's and years that were never made in peace lol. Have tried to gently let individuals know but never goes over well so I don't bother anymore.

On the flip side, when in Cuba my friends there always gift me cigars and everyone tries to sell to me. I usually politely decline and smoke what I brought with me and what I purchase at the LCDH. The ones my friends give me, I smoke with them. I don't have the heart to tell my buddy his gifts are fake, so I take whatever he gives me with graciousness and share a stick with him too. Sure it's his hussle, but he gives them to me as a gift. More times than not they taste fine, have enjoyed some, and the fact that he smokes one with me and we're both still alive means he is comfortable with his source lol.

Location
Where the Sun Never Sets

You just found out a ton about him as a man. There are different levels & kinds of friendships. If one chose to continue associating with him (for whatever reason) that would be information about him worth remembering. - There are many situations where someone who refuses to acknowledge reality can be dangerous to Your life and limb.


the box I am suspect of is Cohiba Siglo 2's and when it was sent to me the seal was broken already....which was a red flag but stupid me was too excited by my first purchase.

After watching the video above, i note the bar code was torn off the box as shown here 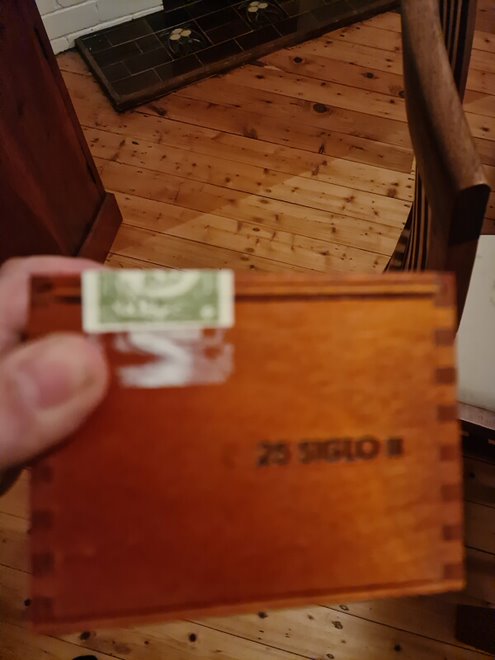 The box looks legit but tampered with, it was me who tried to remove the warning label 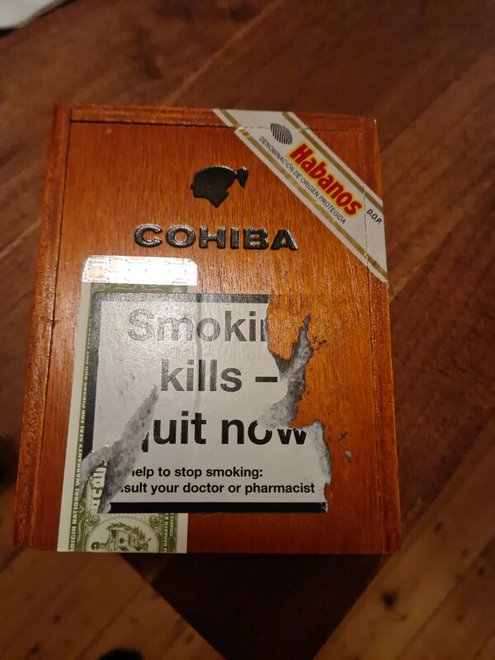 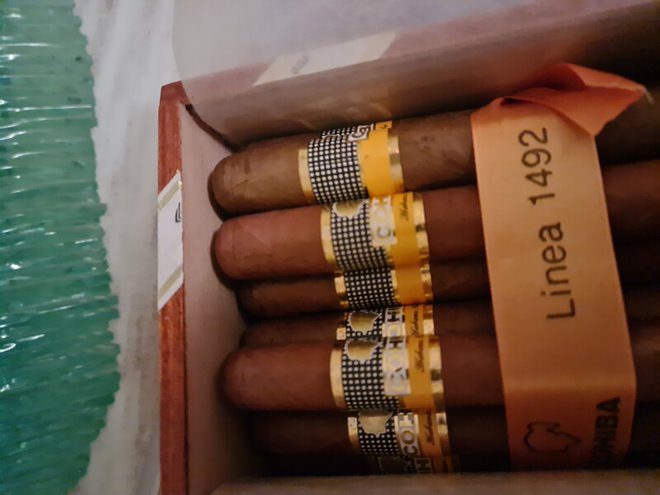 Some of the cigars appear to be darker as it not round and dont roll across the table smoothly due to the difference in shape. Those od ones labels also dont line up with the other in the box . I had a closer look just now and I cant see triple caps on them all like it shows in the video link above..

If i had to guess I think the seller has mixed fakes in with real ones to increase the profit margin. Thats if any of them are even real.

At $980 AUD a box I not willing to roll over if my suspicions are correct.

As I am brand new to this and know a little less than nothing i figured i would ask you guys for advice if any of this is normal and I am just being paranoid or if my concern is legit and I need to seek a refund from the place or purchase during the week. I ordered a box of partagas series P last week as well due to arrive tomorrow but I will be sending those back now as well as I do not feel like i can trust the seller whose name I am leaving out of this thread, at least for now. They are very well known and claim to be one of australias biggest cigar dealers.

Tobacco is very very expensive in Australia due to taxes. A pack of 25 cigarettes is 40 dollars.

Is there a reason you don't order from on-line vendors? Are Australian customs that strict and alert?

I did notice the shop I order from doesn't ship to Australia.

And yes I think you got taken advantage of but I am really not an expert on Cubans.
M

A neighbor gave me a “Cuban” a few weeks ago. He admittedly doesn’t smoke and is from south FL. So I’m sure someone walking around sold him a five pack of fakes to have at home for drunk friends. The label on these “Cohibas” is laughable. Printed on printer paper, resolution looks like a 20 year old inkjet printer and none of it lines up. I am keeping the cigar for shits and giggles. I may eventually put it in a shadow box on the wall of my home office. 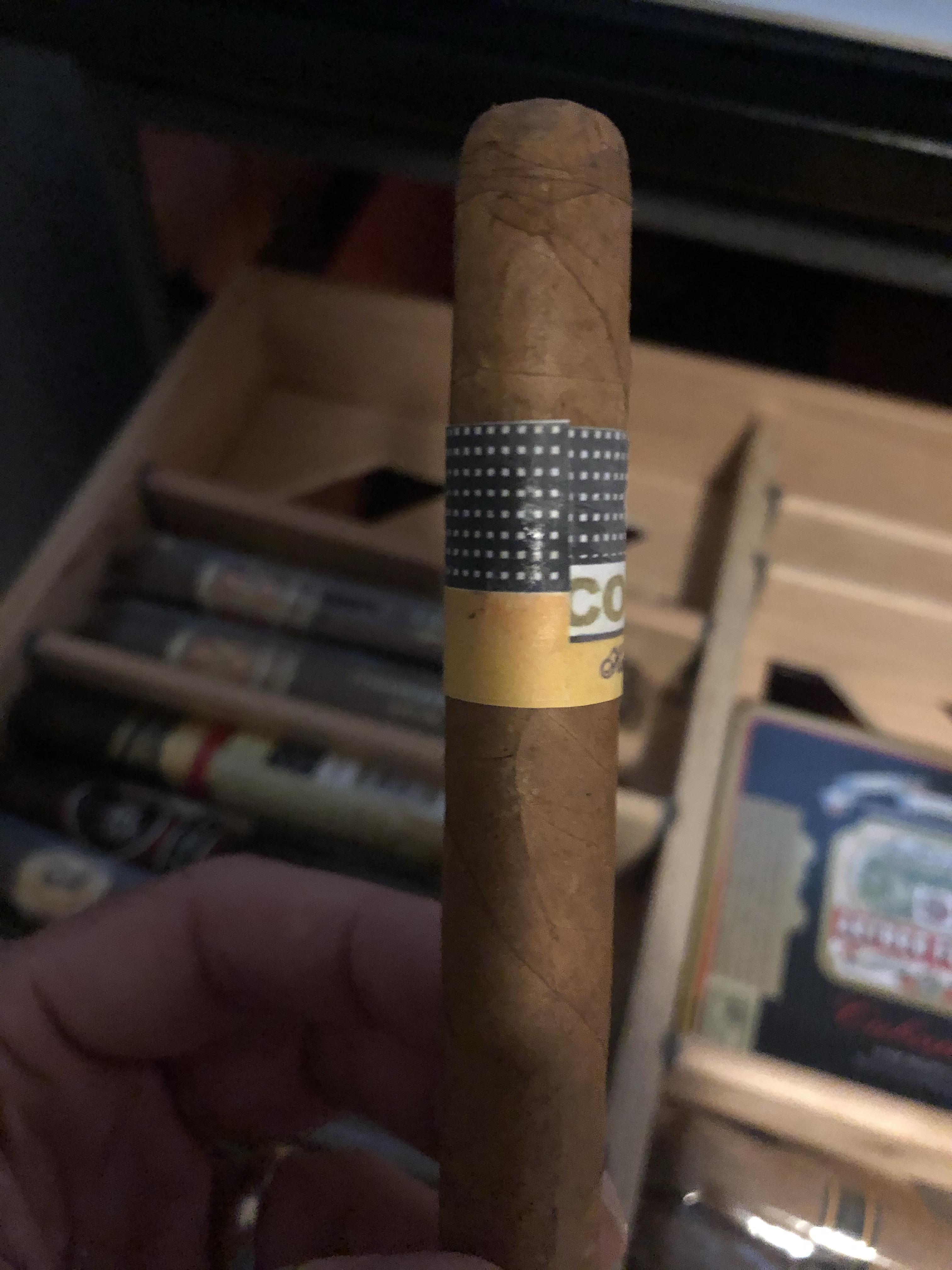