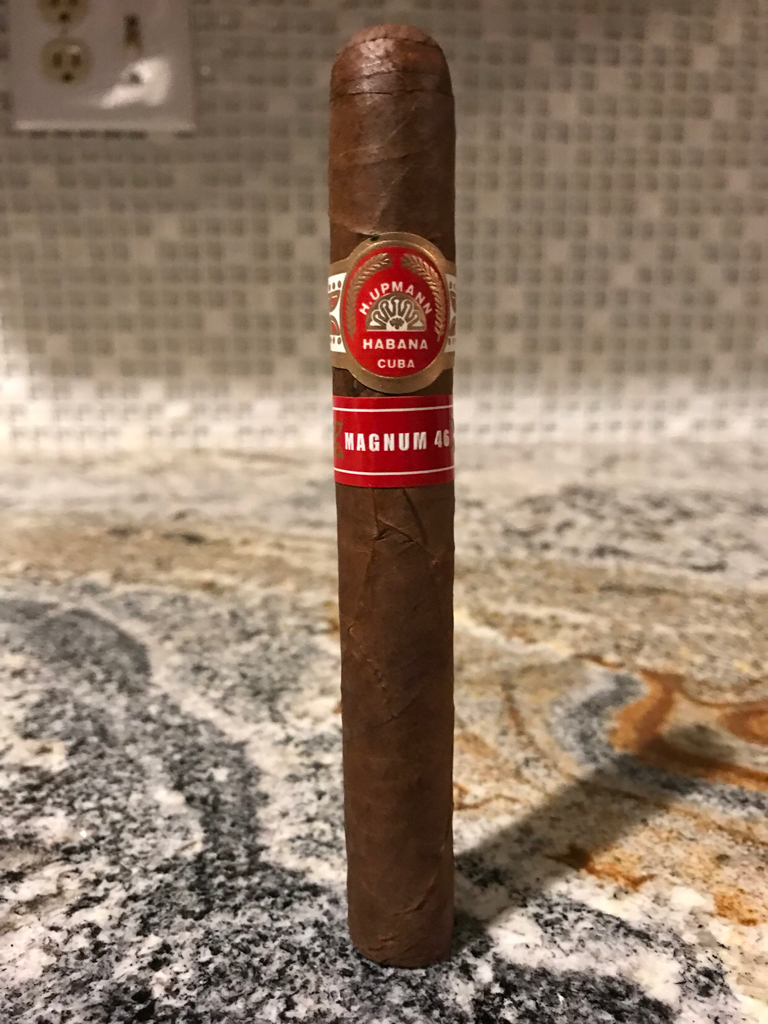 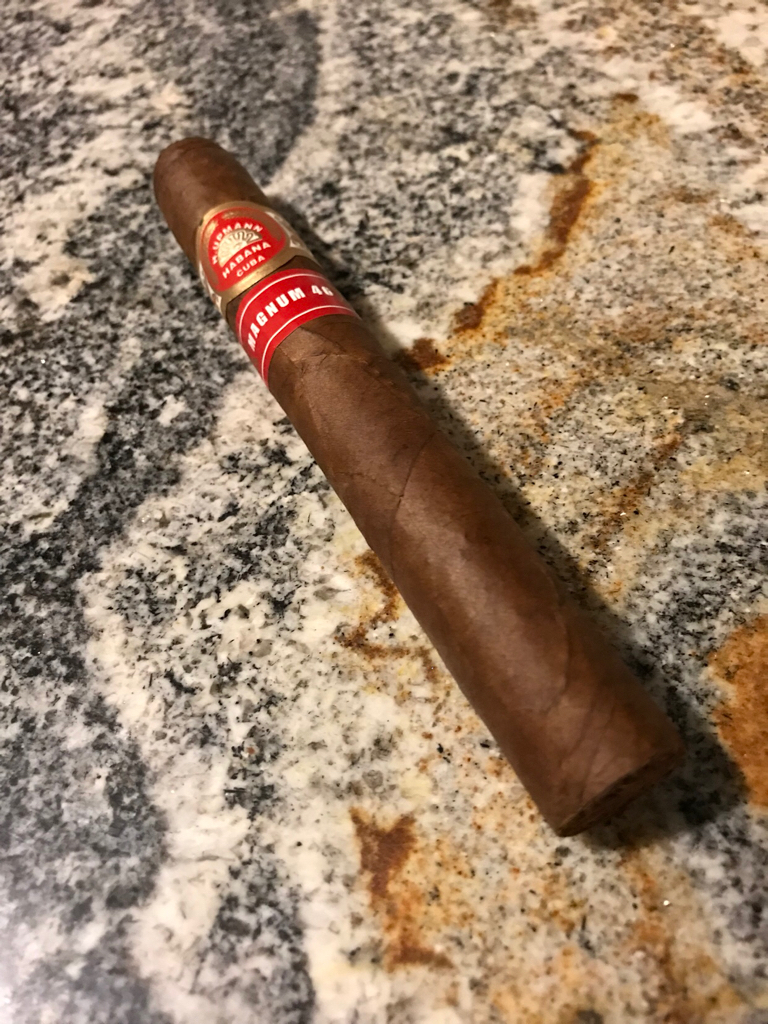 This cigar is a corona gorda with a mottled dark brown wrapper. There is a fair amount of oil to it, and some fairly prominent veins. After cutting, the draw is very good. I light it up and get into the review.

First third: Distinct peppery flavor with undertones of dark earth from the start. After puffing, the flavor of a charred fatty steak coats my mouth. I admire the resilience of Cuban tobacco. A couple months ago, I smoked a Liga Privada #9 that was also from 2014. Fresh, it was at least as spicy and earthy as this, but now all its strength had aged out and it tasted like a flat cola while this Mag 46 still has its kick. To me, corona gordas are the Goldilocks of cigars. A ring gauge of 46 isn’t dainty, but it’s not a jawbreaker either. 5.6 inches isn’t long enough that you need to block out a bunch of your day to smoke it, but it’s not so short that you’re going to need to light another either. Lonsdales are my favorite, but I’m not gonna kick a corona gorda out of bed.

Second third: More of the same flavors as the first third. The edges have softened a bit, but they are all still there. I’m starting to have to do some touch ups to the burn. The filler seems to be burning fine, but the wrapper is doing everything it can to resist the temptation to combust.

Final third: Still the exact same flavors. From the first puff to the final one just constantly beating the drum of pepper and earth. If I was smoking this while doing something else, I could lose focus on this cigar and it would just become background noise. Smoking this for the purpose of doing a review and trying to concentrate on every draw, the monotony becomes aggravating. The continued constant touch ups and relights aren’t helping the situation either.

Final thoughts: The Mag 46 has always felt like an outlier in the Upmann line up to me. Fuller in body and lacking any of the sweetness or baking spices I find in the other offerings I’ve had. The lack of complexity is is undesirable, and the fire proof wrapper is a constant headache. This may be a dud box. I was gifted an 06 that I thought was excellent, so I jumped on this cab when it became available. I’ve had 10 or so, and they’ve all been similar to the one I’ve reviewed. A couple were better, but a few were even worse. Interestingly, the night before, I smoked another Mag 46 that I was gifted from an unknown date or code with a much lighter wrapper. Although still not what I would call definitive Upmann, it was a much more interesting smoke with some complexity. 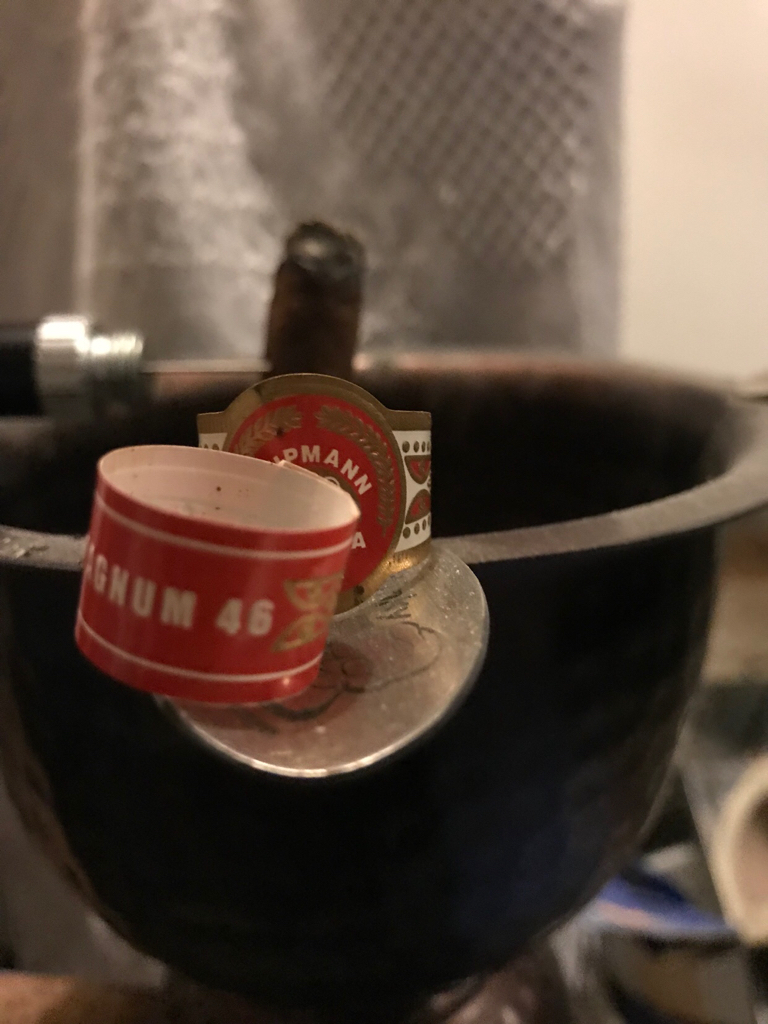 I have found after years of experimentation that I generally don't like Mag 46s without several years of age. Haven't had anything more recent than '16 so I can't speak for the last couple. Your point about the difference rings true with me as I do generally like Connie 1s, Mag 50s, HUPCs and others fresh.

Mossome said:
A couple months ago, I smoked a Liga Privada #9 that was also from 2014. Fresh, it was at least as spicy and earthy as this, but now all its strength had aged out and it tasted like a flat cola while this Mag 46 still has its kick.
Click to expand...

Ha! You may be onto something there.

I smoked through an excellent GEO JUN 14 SLB of Mag 46 @ a year ago. Since then, I have also been smoking out of an LUB ABR 14 cab and they seem to be a completely different cigar. I hope they come around, I have a bunch left. The few decade plus old Mag 46s I've had were great. I agree the 46 is an outlier within the Upmann line in terms of flavor profile.

Thanks for the great review. Great cigar I too like the aged. Hopefully they’ll come around in a few.

Cool review! I really wish they had continued these in the cabs.